Start With Why: The Plan for Engineerdog

Author and TED speaker Simon Sinek knows exactly how great leaders inspire action: They Start with Why. If you don’t have 30 minutes to watch that linked TED video, the main idea is that people don’t buy what you do, they buy why you do it. (Just repeat that phrase 50 times and you’ve basically seen the video.)

This idea is useful here because I’m just one blogger out of many, and I know that nobody cares who I am or what I have to say unless they believe what I believe. For that reason I thought I should make clear the guidelines I follow for EngineerDog posts.

I believe in producing only the highest quality content, even at the cost of consistent posting. The internet contains some of the greatest things ever mixed in with an ocean of crap. I frequently see blogs consisting of some combination of flashing advertisements, RSS feed auto-posts, and a bit of actual content that may or may not be copied straight from Wikipedia. They are usually titled something along the lines of “5 WAYS TO DODGE THE IRS!”, “Kevin Bacon has how many toes?!”, or “This one weird trick will make your iPad waterproof!”

Every time I see a click bait post I’m reminded of the children my wife used to baby sit. They would nag for her attention with ‘Hey! Watch me do this!’, and then proceed to do something normal and mundane like skipping or jumping into a pool for the 50th time in a row (I can’t believe it…another cannonball). For some reason I find this attention seeking phrase to be absolutely hilarious, so I make sure to bug my wife with it at least once a day.

But it’s not nearly as funny when I see it acted out on the internet. Every blogger wants attention, but not everyone has something substantive to offer. Posting click bait amounts to crying woIf and kills your credibility, so my plan for EngineerDog is to create something useful and entertaining before asking for anyone’s attention. 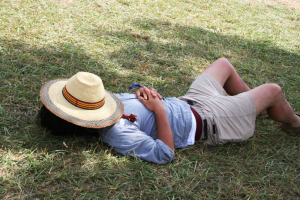 HEY, watch me do this!

I believe that information is best communicated when it is concise, organized, and humorous. I’ve read too many books & articles that were way wayyy too long considering how little information they actually contained. When I’m casually reading (or just pretending to read so chicks think I’m cool) fluff writing is just a minor nuisance. But when I’m coffee drunk at midnight trying to get shit done, I demand immediate results.

When I need specific information I want it now dammit; not tomorrow, not next week, now! So I keep that in mind when I create documents for the EngineerDog resources section. I try to keep things organized, easy to follow, and actually worth the time to use and read. 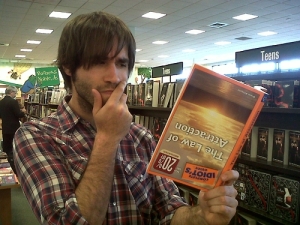 Chicks dig a guy who reads.

The last part of the equation is probably the most important: Humor is the magic sauce that helps readers pay attention. If I’m reading to learn then my best bet is probably an information dense encyclopedia, right? Well not if I can’t go two pages without drifting off to sleep or looking up profanity, or sex, or sexual profanity. That’s why one of my favorite websites is Cracked.com, which basically consists of random informative list-based articles loaded to the waistband with poop jokes. Information mixed with humor gets the message across. Now I’ll be the first to admit that my ability to write entertaining posts is questionable, but that brings me to my next point.

I believe that practice, experimentation, and feedback are the best path to self improvement. Most people have an unspoken belief that in the distant future they’ll be a completely different person than they are today. Have you ever had a poor/unpopular/weird/flabby friend who sees himself becoming rich/famous/awesome/strong in a decade, but who never does anything to change his situation? It’s great to dream but if you don’t have a plan or process to get where you want to be, then in 10 years you are just going to be you-plus-3652-days. Writing this blog will help take me where I want to go, so I’m going to keep at it.

I believe that giving away your best content for free is the path to real success. Just last week I came across an electrical engineering blog where the author offered a ton of great excel resources similar to mine. He was clearly a gifted engineer but everything on his site had an annoying little price tag attached to it. Of course there’s nothing wrong with wanting to be compensated for your time, but by not offering anything useful for free, he missed out on any more attention I might have given him. Since I wasn’t willing to cough up the cash and he wasn’t offering anything useful to me within my price range, I left his website with no intention of returning or referring anyone else.

As an example of the opposite case consider the infamous rapper ‘50 cent’, who has achieved wild success despite having grown up with a history of violence and drug involvement. You could say he hit a low point when early in his career he was blacklisted from the entire recording industry. But rather than give up, he recorded over 30 songs on his own time & dime and distributed them to DJ’s for free to rebuild his reputation.

Lucky for him the public loved it and his popularity rose to the point that he ended up striking a record deal with Eminem and the rest is history. Now I’m not saying that 50 cent is the best role model out there, but there is definitely something to be learned from his story.

6 great albums including “The Massacre” and “Righteous Kill”

50 cent is not the only example of the give-things-away-free-and-people-will-love-you model of success. You’ve heard of Linux, Mozilla Firefox, Wikipedia, and WordPress right? No more need be said.

On a final note, I just enjoy writing. This is probably the most important point because in all likelihood Eminem won’t take a liking to my record album. So it’s a good thing I think its fun to spend the entire afternoon in front of my computer writing a bunch of stuff that not many people will read.